When a man has done what he considers to be his duty to his people and his country, he can rest in peace. I believe I have made that effort and that is, therefore, why I will sleep for the eternity.

Nelson Mandela Day is observed on July 18 every year. The United Nations-mandated holiday is observed to remind the world of his contribution in his fight toward freedom, anti-racism, peace and human rights.  On November 10, 2009, the UN General Assembly adopted a resolution declaring Nelson Mandela’s birthday, i.e., July 18 as Nelson Mandela International Day.

Who is Nelson Mandela?

Nelson Rolihlahla Mandela (1918-2013) was a South African anti-apartheid activist and revolutionary. He dedicated his life to fighting against the injustice meted out by the White colonists and neo-colonists after that. Through his royal lineage, Mandela managed to receive an education at the only university for Black people- the University of Fort Hare.

After years of struggle and participation in the South African freedom movement against the British, followed by the fight against Apartheid with the White Supremacists and successive imprisonment, Mandela became the first democratically-elected President of South Africa in 1994. This day marked a historic feat in the timeline of Modern History.

On this day, we honour Mandela’s values and his unflinching commitment to the service of his people in particular and humanity at large. The day aims to create a dialogue on conflict resolution, inter-race and inter-communal relations, and the protection of minority and vulnerable groups across societies. The day also honours the international struggle for democracy in all parts of the world, particularly in the 20th century.

In December 2015, the UN General Assembly extended the scope of the Nelson Mandela International Day by adopting the United Nations Standard Minimum Rules for the Treatment of Prisoners. This is now known as the Nelson Mandela Rules. These rules extend guidelines on the treatment of prison inmates who should not be viewed as being outside of society, particularly, political prisoners.

“One Hand Can Feed Another”.

In light of the COVID-19 pandemic, this year’s theme has been designed to highlight and resolve the acute hunger and poverty faced by the people across the world in general and in South Africa in particular. To fight poverty and related problems, the South African Government has laid out a set of goals for 2020-2029.

A contemporary of Mandela’s, it is quite easy to draw parallels between the lives and works of Nelson Mandela and Mahatma Gandhi. For starters, both Gandhi and Mandela were lawyers. In fact, Gandhiji was practicing law in South Africa before he moved back to India to participate in the Freedom Movement. Both leaders fought for the rights of their people against a common perpetrator, i.e., British colonialists.

Both Mandela and Gandhi are pioneering stalwarts when freedom and peace are concerned. No discussion on peace, non-violence and equality can be complete without acknowledging their contribution to the same.

Like Gandhi, Mandela too was imprisoned for his revolutionary activities. They were both charged with sedition. He was imprisoned for 27 years between 1964 and 1990. Of these 27 years, the first 18 years of imprisonment were spent in the infamous Robben Island Prison. The horrors of his time in prison and the inhuman conditions Mandela and his compatriots were kept under need no repetition in this article. From his own experience in prison, Mandela fought long and hard to humanize the conditions under which prisoners are kept.

Like Gandhi, Mandela too was a popular leader of the masses. In South Africa, the minority white population controlled the socio-economic-politico forces of the country. Like Gandhi, Mandela led his people to understand their rights and to raise their voice against subjugation, injustice and most importantly Apartheid.

Both Gandhi and Mandela were leaders of the National Congress Parties of their respective countries.

One major difference between them was that while Gandhiji believed in absolute non-violence or ahimsa, Mandela felt the use of violence as a means of political struggle was acceptable when needed.

How to celebrate Nelson Mandela Day?

Mandela’s life and story are and will be an inspiration to people all over the world for all of time. On this day, the first and foremost duty of every individual is to raise their voice and to create awareness of inequality and oppression that may be prevalent in whatever shape or form in any part of the world.

Whenever we are torn by war, hatred, injustice and Fascism, we must recall Mandela’s fight and his unceasing struggle. Hopefully, it will inspire us to rise above prejudice, violation and transgression.

We hope this article was useful for you. You can find several interesting articles on  Current Affairs and General Knowledge over ixamBee. These updates are concise and totally free. BeePedia is also available in Hindi.

If you are preparing for one or more government exam(s), ixamBee has a number of online courses that will help you with your preparation and lead you toward ultimately realizing your dreams.

At ixamBee, you can find free Online Test Series, GK updates in the form of BeePedia, as well as latest updates for Bank PO, Bank Clerk, SSC, RBI, NABARD and Other Government Jobs.

NABARD Grade A Mains 2021: How to Prepare for Descriptive ARD?

What Next After 12th? 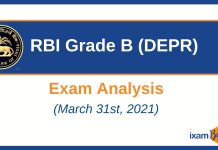